Right now I’m barely at the first stage and my most burning question is:

What kind of assignments yield the biggest income per hour?

“Per hour” part is pretty important, since I have a fairly limited time I can spend flying, so I’d like to spend it as efficiently as I can.

There are two variables which directly influence how much you get paid for an assignment: distance and number of passengers in the assignment. The bigger the parameter, the higher the price. It is also important how many assignments you can complete at once. Finally, if we are concerned with time efficiency, we need to consider how much it takes to perform the flight.

From a reliable source I have obtained the formula used to calculate assignment pay:

Looks complicated, so let’s graph it (assuming one passenger per assignment): 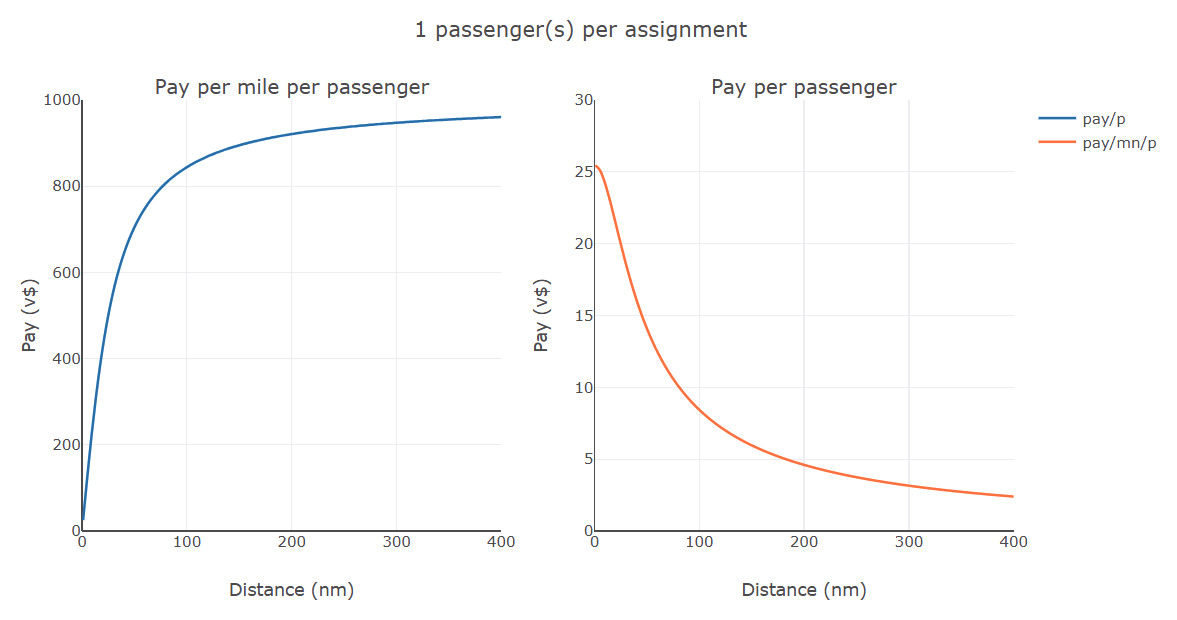 Graph on the left show pay depending on distance. The right one shows pay per mile depending on distance. It’s easy to see that pay per mile drops down quickly and, consequentially, total price tag levels out. It also shows that short-distance assignments are promising to be very profitable. But before we move on, let’s see what about number of passengers per assignment, for example with a group of 3 passengers: 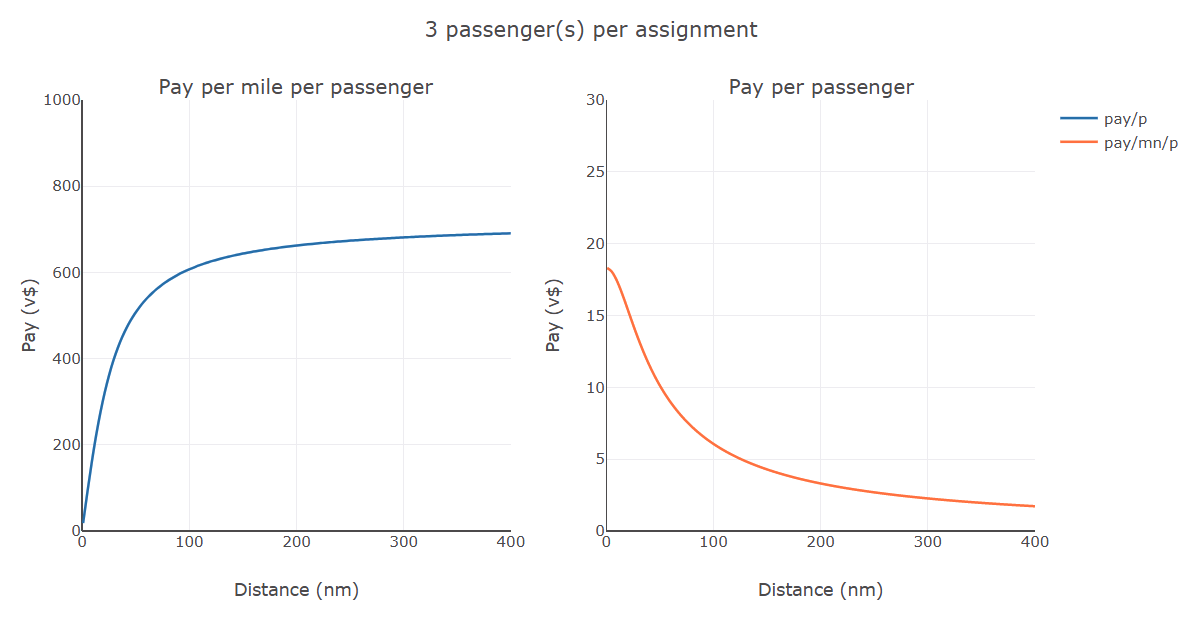 That doesn’t look very exciting. For example, price per passenger at 100 nm is ~30% lower. Well, this is not a revelation: FSE community found this out long time ago and experienced FBO network owners are setting up their gates to generate 1-person assignments only.

As a side note: I do have some thoughts on why it may make sense to allow small group assignments (perhaps 2-3 passengers), but that’s well beyond this post.

This is a tricky part. In the simplest case we can assume that flight duration is just distance divided by aircraft cruise speed. However, this is not quite true in practice: climb and approach are flown at lower speeds, there’s also some overhead for loading/unloading and so on. For short-range flights it may make a big difference.

To make a more educated guess I decided to download flight records from FSE data feeds. Luckily, flight history is publicly available for every aircraft in the game by its registration number. It is also possible to obtain a complete list of aircrafts for a given make-model.

There’s only one technical problem: downloading flight records is roughly one request per aircraft, and there are thousands of those in the game. With existing rate limiting it takes a good while to get a complete dataset for even a single make-model. I focused my attention on a few models which seemed the most relevant to me:

With the data at hands, lets begin with verifying my initial hypothesis: dependency between flight time and distance is not quite linear. Here are some plots illustrating that for two arguably most popular airplane models in the game: 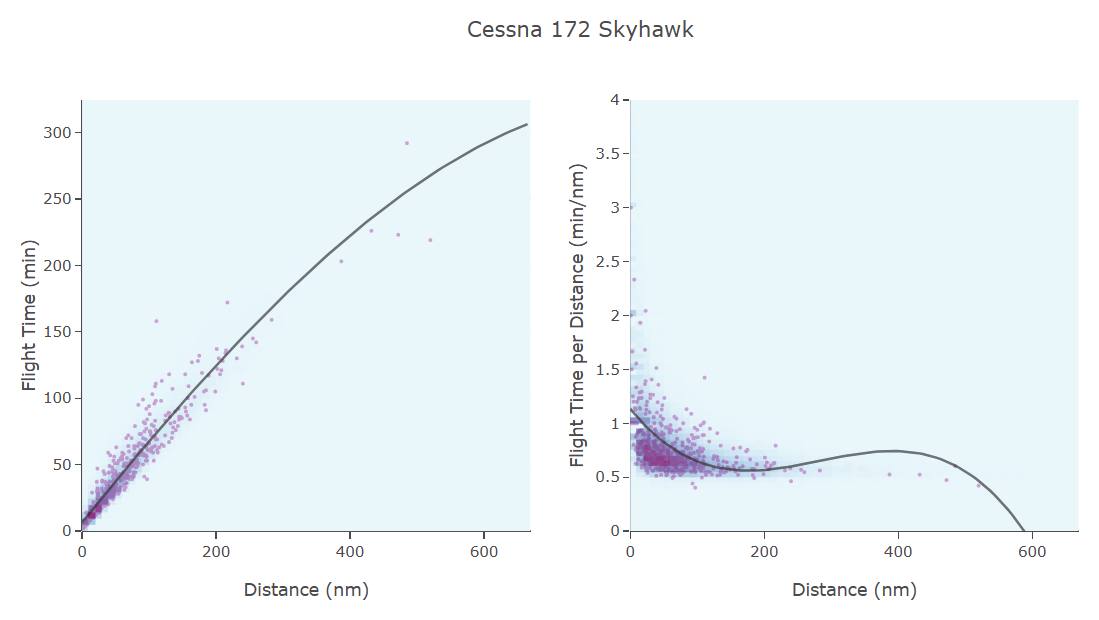 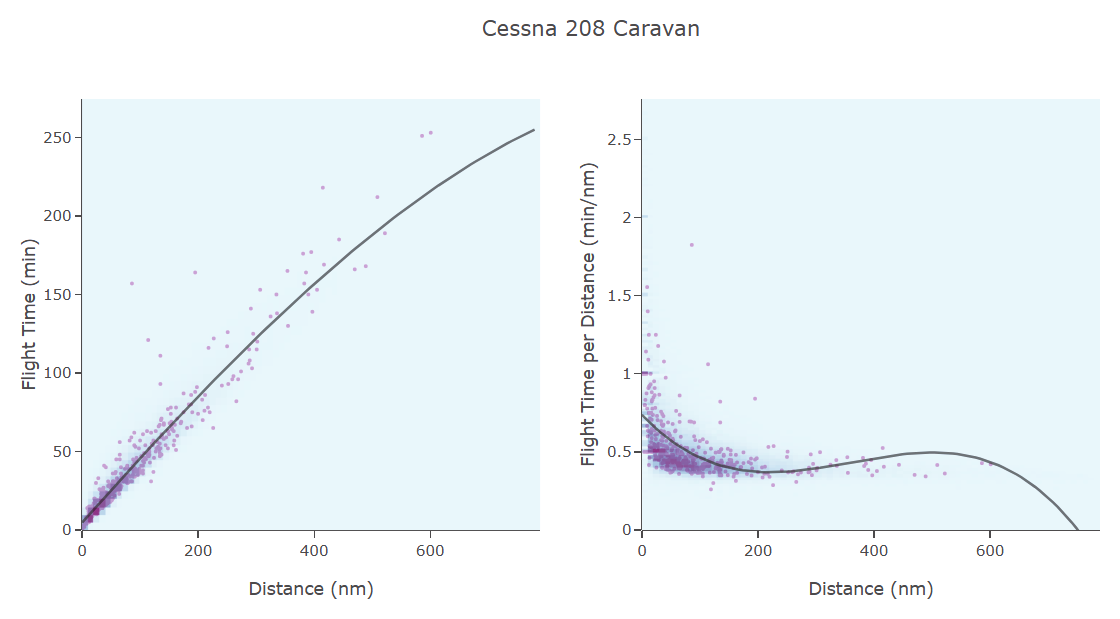 Purple dots on graphs are individual samples of flight records, background is a heatmap of unsampled data set, grey line is a result of approximating the function with polynomial regression. Left graph demonstrates flight time itself and right one — flight time per mile. It’s easy to see, especially on the left graph, that for shorter flights time per nm travelled is higher. It is also curious that vast majority of flights are no longer than 200nm.

Putting it all together: how far shall we fly?

Let’s formulate our final model, which will give us the much-desired answer. First of all, we will be making a number of assumptions:

With all that we arrive to a simple formula:

…where FlightTime can be calculated in three different ways I talked about above. And here are the graphs:

That leads us to our final conclusions:

If you’ve made it that far, you must be really interested in the subject. Well, I have a treat for you! The Jupyter notebook and data sets I used are available on GitHub. Also, by the virtue of mybinder.org the notebook is available to play with, enjoy!

Lastly, to put an end to Airbus vs Boeing debate. A320 is clearly more profitable to fly than B737: